Home / Health and Soul / I Think, Therefore I Care

Philosophy is often cited as “thinking about thinking”, so with World Philosophy Day being celebrated this week (November 16th), it’s time to think about how Western society has thought about healthcare throughout the years. From Ancient Greece to today, it may come as a surprise that healthcare practices have always been influenced by, and influenced in turn, philosophical thought.

Starting at what is considered by most as the “beginning” of Western civilisation, Greek philosophers postulated the nature of being, an individual’s relationship with the world, and how to understand reality. Aristotle, perhaps the most influential thinker that lived, defined humans as rational beings ruled by reason. His philosophy cited the process of observation and deductions, the precursor to modern scientific methods. This idea was put into practice by the “father of medicine” Hippocrates, who prioritized “do no harm” patient care through extensive observation and deductive diagnosis.

Like most Greek thinkers of the time, both Aristotle and Hippocrates ascribed to the belief that nature is made up of basic elements: fire, water, air, and earth—which in the human body comprises of yellow bile, black bile, phlegm and sanguine; the humours. Illness in an individual was seen as an imbalance of these humours, an idea which lasted for several centuries. Despite the simplicity of healthcare available, much of the foundations of medicine today can be traced back to Hippocrates and this time.

The Middle Ages are sometimes referred to as the Dark Ages for good reason, as there was very little development in society, including in philosophy or health practices. A vast majority of philosophical thought was centred on Christianity, and consolidating Christian beliefs with Aristotelian principles. St Augustine suggested that the body and soul were separate within a person, and believed the latter was superior. In this way, ‘curing’ a person’s soul was an important aspect of patient care; doctors would still provide physical care, but would encourage patients to put their faith in God and the afterlife.

Healthcare and hygiene were very poor, which contributed to a low life expectancy and low appreciation for medicine. Many of the medical advancements from Greek and Roman times were abandoned, although the belief that illness was an effect of in imbalance of the humours remained. In addition, sin was often considered a cause of disease, and clergymen often practiced medicine.

As the name suggests, the 17th century thinkers stood apart from the religious philosophy of the past and focused on defining reason. It was the beginning of a movement towards open societies where individuals could seek freedom and progress, which continued into the 18th century. Philosophy centered around creating structures for knowledge, and was divided into two main schools of thought, Rationalism (where knowledge comes from pure reason alone, at least in principle), and Empiricism (where knowledge comes through our senses and experiences). The most prominent philosopher of the time was perhaps Rene Descartes, a Rationalist who used ‘self-evident’ truths to “deduce” the world around him, called deductive reasoning.

Both Descartes’ and the empiricists’ ideas were reflected in the scientific world where experimentation and the scientific methods were introduced. In healthcare, this translated into new practices and understandings of the human body and diseases, aided by inventions such as the microscope. A physician by the name of Baptista van Helmont preached the quantification of diagnosis, and first stated that disease was a separate parasitic entity. Despite these steps forward, surgery was still quite primitive and unsafe for patients and surgeons alike, as anaesthesia and control of infection had not yet arrived.

The age of Enlightenment, as named by philosopher Immanuel Kant, saw rapid progress in technology, society, and thought. Through the revolutions in France and America, the Enlightenment period saw an embrace of democracy, rationality and citizenship. Kant believed that the ideas from Rationalists and empiricists from the last century could be synthesized. He postured that there is universal knowledge outside of experience, but that an individual can also gain knowledge through their experiences, which they use to understand the world.  It is during the Enlightenment period that healthcare was secularised and systemised, with hospitals and clinics being built. Surgeons banded together to gain respect in the scientific community, forming groups such as the Royal Society of Surgeons (1731), and by the end of the century barbers were forbade from practicing surgery.

THE RISE OF CAPITALISM

As the 1800’s began, Jeremy Bentham’s ethical philosophy of utilitarianism was born; that morally right actions are ones that bring about the most good. With the Industrial Revolution, improvements in health were seen as having an economic value, as healthy workers could contribute to the economy of the state. Government health policies were introduced, stepping forward to fulfil Bentham’s belief that the welfare of all peoples (regardless of wealth) could best be achieved through good governance.

In the coming years, Adam Smith’s ideas from the late 1770’s regarding free-market economics prevailed. Smith believed that voluntary trades and competition between self-interest individuals could lead to economic prosperity and benefits within industry. Although under regulations, the healthcare industry became an economic pillar in the 20th century, especially in the United States. Medical advancements occurred in all fields, including new medications and cures, improved surgical tools, and safe (sterilised) hospital environments for patients. On the other hand, the push to maximise profits also lead to issues such as overworked nurses and surgeons.

As a response to an increasingly impersonalised society, ethics has again become an important aspect of current philosophical inquiry. Phillipa Foot’s famous trolley problem from 1967 encapsulates the balancing act of ethics in practice, and argues that there is always an element of subjectivism- that values are not necessarily ‘natural’, but chosen by individuals. In modern healthcare, ethical considerations make up a big part of day-to-day medical procedures. Healthcare workers are under the ethical imperative to do all they can to prevent errors and treat the patient. They must maintain professional conduct, be honest with their patients regarding their care, and take responsibility for ensuring the safety of themselves and colleagues. Institutions can, and ethically should, do all they can to ensure staff safety, so the healthcare workers can focus on “doing not harm” to their patients.

A Timeline of  Western Philosophy and Healthcare 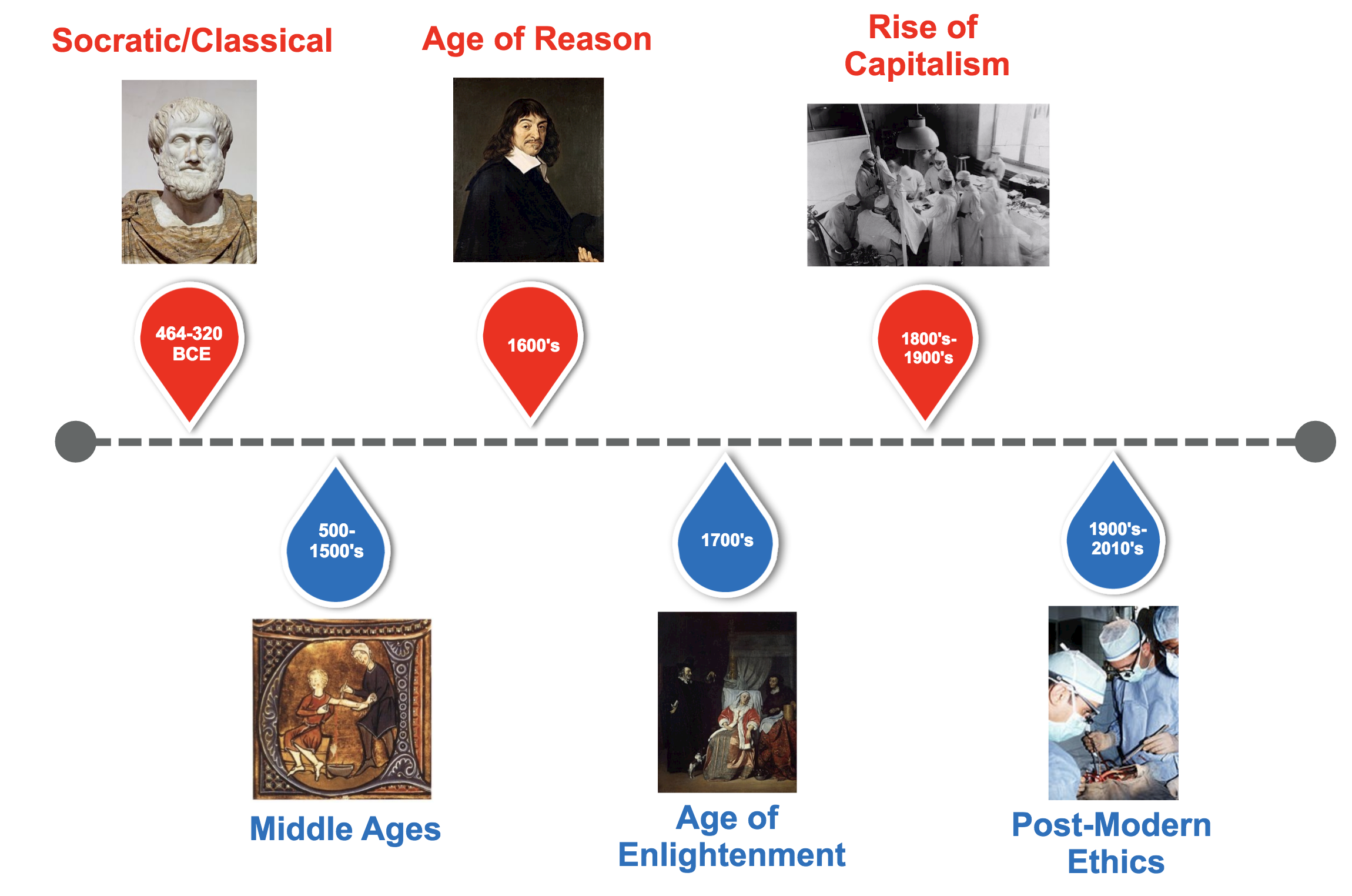