Safety scalpels were first heavily promoted in response to a US legislation change in 2000 known as the Needlestick Safety and Prevention Act. As the name might suggest, scalpel scalpels are active safety devices that are designed to protect their users. While the idea of safety scalpels being a functional solution might all be well and good- as far as surgeons are concerned, this couldn’t be further from the truth.

Scalpel injuries occur in settings like an Operating Theatre (Operating Room), and avoiding them is in everyone’s best interest. Scalpel injuries can sever digital arteries nerves and tendons, cause transmission of blood-borne disease, and even have mental repercussions to the victim. A survey of 98 Massachusetts hospitals in 2015 reported that while scalpel injuries accounted for 8% of sharps injuries, approximately 60% of these scalpel injuries were involving safety scalpels. 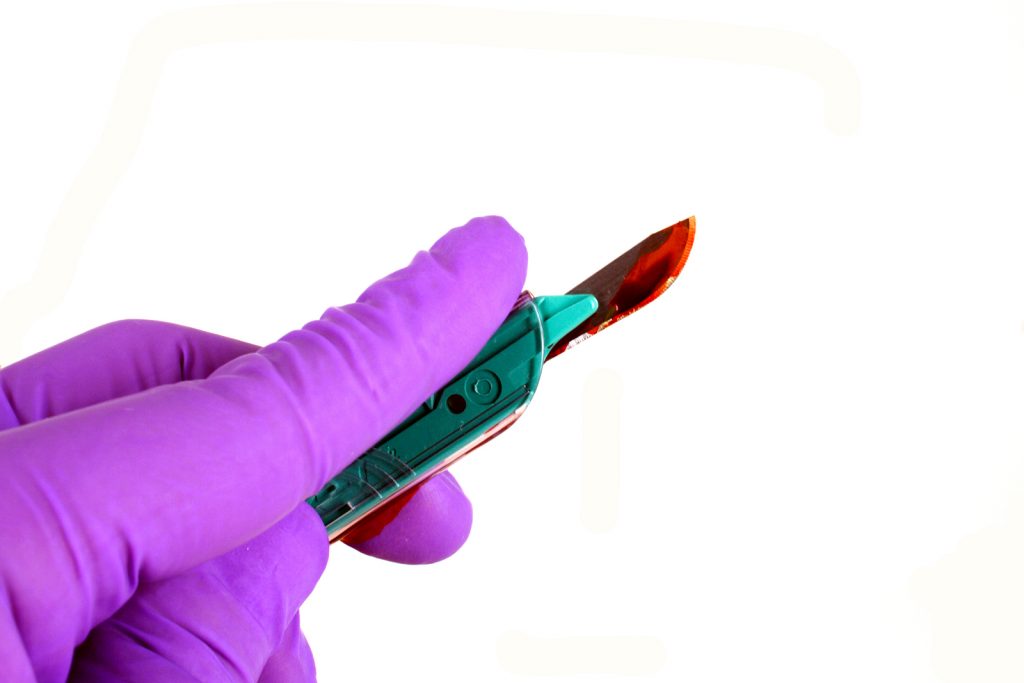 A survey conducted across 30 different hospitals in Australia and the United States found that up to 98% of surgeons preferred traditional scalpel handles (ie. reusable metal handles) over safety scalpels. Complaints about safety scalpels included:

Lack of correct balance and feel

Weight and feel are very important when it comes to choosing a scalpel. Having an unbalanced or unfamiliar scalpel can inhibit a surgeon’s coordination and dexterity. The plastic handles on safety scalpels also constrain the tactile feedback that a surgeon would normally get from a traditional handle. Some surgeons even compare safety scalpels to eating a meal with a plastic knife and fork.

Obstructed view due to the safety feature

The sheaths on some safety scalpels can get in the way of a surgical procedure. Because of its proximity to the blade, the sheath can obstruct a surgeon’s view while working and has even been reported to physically limit the depth of an incision a surgeon can make.

There is a stark contrast in the range of choice when comparing the number of options available between traditional scalpels and safety scalpels. Looking at the options available from major scalpel manufacturers such as Swann Morton and Aesuclap, traditional scalpels offer upward of 236 possible combinations of scalpel blades and reusable handles, while safety scalpels only offers around 16 options.

One of the main factors at play is the fact that safety scalpels are active safety devices. An active safety device is one that has a safety feature that needs to be activated by the user in order to serve its purpose and to be “safe”. You can read more about active and passive safety devices in a previous blog here. Safety scalpels usually employ a sheath or retracting feature that covers the blade; the problem is that they need to be consciously activated by the user to serve their purpose. CDC sponsored research published by Alverdo-Ramy found that the activation rates of active safety features were as low as 17% in some hospitals. Some surgeons have stated that they fear injury during the activation process because their fingers get so close to the scalpel blade.

The term “safety scalpel” is a misnomer- there is no supportive proof that safety scalpels are actually safe. Safety procedures involving traditional scalpels have been found to be more effective at reducing sharps injuries. Combining the use of a passing tray and single-handed scalpel blade removers such as the Qlicksmart BladeCASETTE is one suggested action that can help reduce sharps injuries.